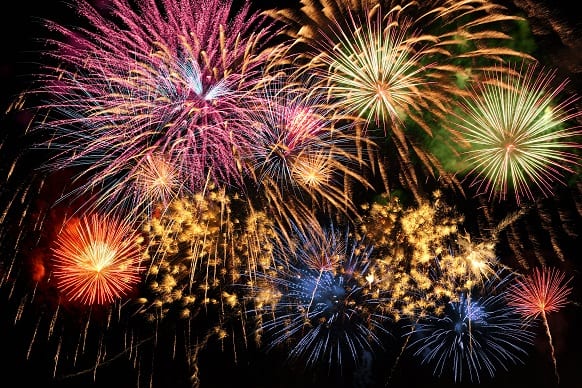 Lighting up Alberta one Firework at a Time

Dedicated to providing the best in professional-quality pyrotechnic shells for certified and licensed firework shooters, Aerial Fireworks is the premiere source for explosive firework displays in Alberta. We not only design complex, colourful firework spectacles for our clients, we are also the leading source of shells for Alberta’s other aerial display technicians.

From this vantage point atop the Alberta fireworks industry, Aerial Fireworks would like to share some fascinating pyrotechnical tidbits and “huo yao” history to ignite the same passion for gunpowder in our site visitors as we have harboured for a lifetime.

In the Beginning…The Big Bang

According to the distinguished Imperial College of London, the stuff that makes fireworks go BANG was accidently discovered by a cook in China over 2000 years ago. Sadly, this presumably surprised cook’s name has been lost to antiquity, but was likely something like “Lefty” or “Jumpy” or “Third Degree Bernie”. The mysterious, explosive powder Bernie created was nicknamed, “huo yao” or “Fire Chemical” and is the substance we now call gunpowder. Following its discovery, the Chinese immediately hit upon the most important application of this new compound which is, of course, making firecrackers.  They did this by cramming huo yao into bamboo tubes and sparking up one end.
Fast forward a couple of millennia to now and it is apparent that watching gunpowder explode is as popular with modern folks as it was with Bernie the Burnout in China back in the day.

It was in Canada’s birth year, 1867, when Swedish chemist, Alfred Nobel, received a patent for dynamite; a much more stable form of explosive than the nitroglycerine which had been used prior to Nobel’s invention. (Historians are unsure if there was ever a link between the two momentous occasions and fire off Roman candles every Canada Day just to be on the safe side.)
Ever the dedicated pacifist, Nobel used his perfected version of huo yao to create a business empire that included 90 armament factories. To assuage his guilt over being the “Merchant of Death”, which the mid-1800’s tabloids such as “The Ye Olde Nationale Inquirer” and “Foul Apparitions Today” called him, Nobel embraced pacifism more vigorously in his later years and established the Nobel prizes in 1895 to encourage peace and peaceful scientific research in the world.

For the first 1800 years or so, huo yao was mostly a yellow/orange flash in the pan. It took the Italians to come up with a rocket that could launch skyward and explode into a rainbow of colours. Until that time, there were no reds, violets or blues in the explosive displays due to the use of steel in the charcoal. Only by mixing other elements can these other colours be produced in the firework flash and this exploration continues. To this day, explosion experimenters are still looking to create a recipe that will produce forest green, for example.

Come back soon for much more firework lore  in our blogs to come from Alberta’s favourite firework supplier and pyrotechnical performance provider.